A Personal Experience By Corey Janz

When planning my trip to Israel and Palestine, I wasn’t fond of traveling there during the height of summer. But it couldn’t be helped.

Well, it wasn’t because I was hopelessly attracted to the blazing heat like a mesmerized bug to a bug-zapper.

It was because of Bet Lahem Live.

Bet Lahem Live is a festival in Bethlehem that is put on annually by an organization called Holy Land Trust. The festival’s aim, if you’ll forgive my oversimplification, is to link up the international community with the Bethlehem community by means of the arts, with the hope that together we can help transform Bethlehem into a city of peace despite the conflict and oppression it continually faces.

The brain behind the festival belongs to a gentleman named Sami Awad, the founder, and director of Holy Land Trust. I had the distinct pleasure of meeting him—and in such a way that was true to Palestinian form.

After a full morning in Bethlehem, I stopped in at Jivana Café for lunch. I stepped inside and was greeted casually by a table of folks who were drinking and smoking shisha—most of them, I noticed, were internationals. Only a few minutes after sitting down, one of the men got up, walked over to my table, and extended his hand, introducing himself as Sami. He asked if he could order for me, suggesting the Makloobeh, which wasn’t even on the menu. He popped out to the bar to place my order, came back with a drink, and sat down to chat with me.

Let me just say again that this was Sami Awad—Sami, a well-educated international activist and speaker who runs what is quite possibly Bethlehem’s most formidable peace-building group; Sami, the guy in charge of the whole bustling festival that had gotten underway only the day before; Sami, the guy who was currently sitting down as host to the international artists who were part of the festival lineup.

I was merely a festival-goer—one of many—and he just took the time to get out of his seat, take my order, and then sit down to get to know me a bit. That is Palestinian hospitality.

From the short conversation that ensued before Sami got up to return to his table, I learned a bit more about Holy Land Trust; I learned that it is a peace-building organization concerned first-and-foremost with peace at a microscopic level—that is, it is concerned about the humanity of each individual involved. “We don’t care about a political solution,” Sami told me, “we care about a human solution.” Their operation is centered on three things: Healing, Transformation, and Nonviolence.

I spent most of my time during the festival helping man Walter’s booth of Peace Parcels. In addition to the tear gas ornaments, Walter was also selling the shells of rubber bullets that he had transformed into candles, as well as an assortment of earrings, made by one of his friends using the little (and rather harmless) marbles that protesting Palestinian kids used to hurl at Israeli soldiers with slingshots. 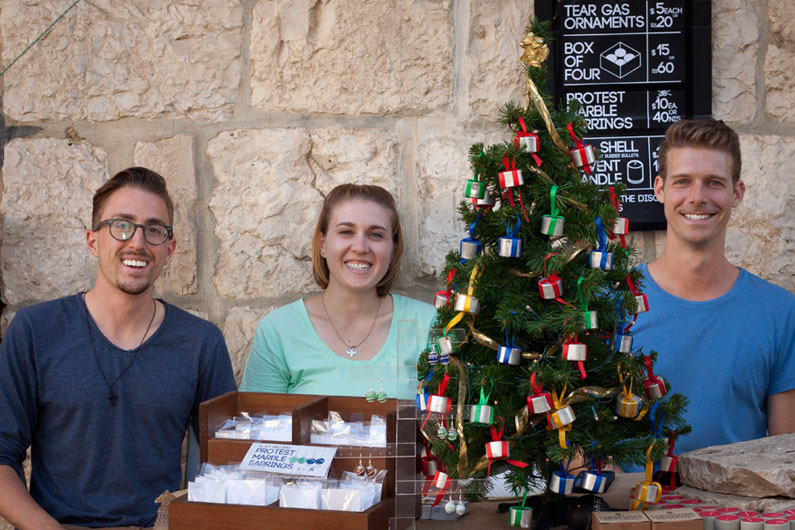 Manning the booth with Walter and Karis (Walter’s sister, who was also visiting Bethlehem

Walter was mainly marketing his goods to the ‘ajanib—foreigners (like us!)—who were visiting the festival. They were but a minority, though—a small population interspersed amongst a predominantly local crowd.

Regardless, the booth caught the eye of many passers-by, and I saw many Palestinians look with shock at the little Christmas tree, decorated as it was with beautified tear gas canisters. For many, their eyes merely widened as their necks turned to keep the booth in sight while they continued to walk by; for some very few others, curious confusion eventually resulted in abject disapproval—a few even expressed their disgust to Walter as he tried to explain to them what he was doing; most of the locals who stopped to investigate, however, smiled broadly and hopefully, shaking his hand as they told him that he was doing very important work in a clever and intelligent way.

Bet Lahem Live had quite an international lineup of acts, but there was also a fair supply of local artists. Given the fact that I’ve been traveling with my eyes peeled for art expressing the local culture, these were the ones I was most interested in.

When I wasn’t selling ornaments, I saw several musical acts of very different stripes. The first one was the four-year-old Miar Kawwas; it may well have been the cutest thing I saw during my entire trip. If you think (as many do) those hearing children speak in foreign tongues is adorable, you need to hear them sing…

Another artist I saw was Amjad Kheir—a talented Palestinian singer from Jerusalem. Amjad’s music has a very local sound, complete with all the ornamental vocal riffs and quarter-tone scales associated with Middle Eastern music. I was astonished at his considerable vocal talent, just as I was both mesmerized and confused by the keyboardist’s synth sounds, which mimicked the bending and weaving string layers so common in this genre of music. I was mildly put off by the artificial sound, but he really nailed his parts and made it work within the overall mix.

Finally, I should also mention Mafar Band—a group straight out of Bethlehem who boasts a very Western alternative rock sound. They were a pretty decent live act, if not a bit generic by Western standards.

It’s worth mentioning that, what with global consciousness and all that business, Western music is definitely present here—and it’s making a rather large dent in the musical culture in this part of the world (as I’m sure it is almost everywhere else, really). I’m not sure what to think about this. We in the West have really mastered the way we do music, so I guess we have that going for us. But we’ve also royally screwed up and shrunken down our idea of what music is to a given society.

Somehow it’s become completely customizable and individualistic, where the lion’s share of music is selected and listened to whenever and wherever the personal listener so desires.

Somehow it’s become consumerism, where your audience only needs to sit back while you spoon-feed them mostly trite — though thoroughly entertaining — content that requires little-to-no personal digestion (you might get away with mixing a bit of social protest in, but be careful not to make your listeners feel like they might have a part to play or they’ll vomit it up as vitriol).

Somehow live music has become a visual performance, where how good your music sounds doesn’t matter nearly as much as how good you look doing it.

Somehow it’s become a source of ridiculous, hierarchical idolatry where the musicians who have miraculously managed to ‘make it big’ (because that’s the only way to really financially support yourself in our mode of musical industry) become hot-shot superstars and their audience becomes a slavering mob of passive gush.

(I’ve ranted and raved about this sort of thing much more thoroughly, and hopefully much more intelligently, in multiple academic papers during my time at Regent. So if you want qualifications to my brazen statements above, I can send you some.)

Now, of course, I’m not saying we don’t have anything good to offer, and I’m not saying all Western music looks like the caricature I’ve drawn above. But I can’t help but wonder how much Middle Eastern music culture is losing in the process of integrating the Western approach…

On that note: by far the most well-known Western act at Bet Lahem Live was Marcus and Winston, of Mumford & Sons fame. They performed on Saturday night…well, they sort of performed. I guess. Maybe.

Their show involved none of their own music, and neither of them had instruments strapped on or mics in front of them. Instead of doing what they’re known for, they DJ’ed a short set of music—and, quite honestly, they didn’t quite seem to know how.

Basically, we just all stood there looking at them as they figured out how to transition from song to song and how to kinda-sorta modify the sound a little. For the most part, they took the stage in shifts—one staring blankly at the iPad they were using while they other bounced stage-left for a smoke-break or a drink (well, actually, Marcus usually just brought his drinks and cigarettes on stage with him; so I’m not sure what he was doing off-stage).

The experience was somewhat baffling and quite chuckle-worthy. As I looked around the people around me, I noticed a fair increase in Western faces,*, and a somewhat thinned crowd; the locals, it seemed, were not quite familiar with these Western superstars just yet. And, well, their musical presence at the festival probably won’t do much to change that either.

But here’s why I don’t care.

You’ve read my rant above about Western music, and you’ve just learned about how weird and sub-par their musical showing was at Bet Lahem Live—but I was nevertheless really really excited about their presence here in Bethlehem.

This is because I learned, through Sami, that Marcus and Winston were touring through Israel-Palestine with The Telos Group. Aside from explaining why they were in Bethlehem in the first place (because there is absolutely no way they came all the way here just to DJ a half-hour set of canned music), this has the potential to be really really good news.

The Telos Group is a peace-building organization based out of the States that is Pro-Palestinian and Pro-Israeli. They help raise Westerners to a better awareness of what’s actually going down in the Holy Land, encouraging those Westerners to raise awareness themselves. They’ve worked with one of my favorite and worship groups The Brilliance, who write some of the most insightful contemporary liturgical music I’ve ever heard. Dr. Steven Garber, who is on their board of directors, taught at Regent College just this summer. Way back in the travel-planning stage, I had a long and illuminating phone call with their executive director Todd Deatherage, and I got all sorts of help from Sarah Stern, one of their program coordinators in Jerusalem.

In short, based on their affiliations, and based on my personal contact with them, I would assert that The Telos Group is very legit and a way that is very relevant and present to the Western world.

So, that in mind, imagine with me if you will, what might happen when a legit peace-building and awareness-raising organization like Telos educates and works with a highly influential musical group like Mumford…

Couldn’t that be exciting? Mightn’t it create more widespread awareness of what’s going on here (provided their audience doesn’t vomit up their message as vitriol, of course)? Maybe it’s a stretch, but what if the next Mumford album is to Israel-Palestine what Paul Simon’s Graceland was to South Africa?!? When I asked Sami about the possibility, he certainly hinted that something like that might be in the works…

The Effect of Apartheid

Spring update: nurturing new life in a time of crisis